Svenska kraftnät has made a request for change regarding a new sum allocation in the market coupling for day ahead trade for SE3 to DK1 and NO1. The purpose is to increase available trading capacities between these bidding zones. Implementation of the proposal requires joint prioritization of TSOs and power exchanges in EU.

During 2021 east-west energy flows has led to large reductions in capacities that can be available for trade between SE3 and surrounding bidding areas maintaining operational security. Svenska kraftnät is working on a number of measures to increase trading capacities, both in the short and long term.

A sum allocation enables better use of the transmission grid

One important measure is our proposal for a new sum allocation in the market coupling for the day-ahead market for SE3 to DK1 and NO1. If this is introduced it would mean that the permissible flow for one of the interconnectors can be increased under certain conditions, and vice versa. This would enable higher reliable trade exchanges in east-west flow situations, especially in situations where there is import to SE3 on one connection and exports on the other.

Svenska kraftnät’s analyses show that introduction of a new sum allocation would significantly increase the trading opportunities between DK1 and NO1 while maintaining operational security. The secure capacity can then be used as efficient as possible, until the new Nordic capacity calculation and allocation method is implemented. The introduction of flow-based capacity calculation and allocation makes the sum allocation superfluous; the method in itself means that this type of optimization will be done for all connections.

A consequence of introducing the sum allocation is that non-intuitive flows can occur between bidding zones at times, resulting in negative congestion income. This could for instance occur for the flow between SE3-NO1 in situations where the price is lowest in SE3, but higher in DK1 than NO1.

Svenska kraftnät calculates and allocates trading capacities based on the expected flow situation in the grid during operations. This means that the transit capacity through SE3 and westwards differs depending on expected load and production patterns for the operational hour. A sum allocation is expected to continuously increase the trading capacity when a connection does not use the entire allocated capacity or where the prices in each bidding zone entail an eastern market flow.

In this example, we assume that the secure capacity for SE3 in the westerly direction is 1000 MW. For the sake of simplicity, it is distributed as 500 MW exports to NO1 and 500 MW to DK1. Without the sum allocation, this is the maximum export from SE3 for each interconnector in the market coupling for day ahead trading.

On the other hand, if a sum allocation is implemented, flows between SE3 and NO1 and DK1 can be taken into account. In practical terms, imports to SE3 from DK1 or NO1 are added to the sum allocation (corresponding to total secure capacity, in the example 1000 MW). When importing to SE3 from DK1, exports to NO1 can then increase by the corresponding amount. With an import from DK1 of 500 MW, the total export to NO1 can be increased from 500 MW to 1500 MW. In this example, sum allocation would increase the total electricity trade and trade to NO1 by 1000 MW. The same, of course, also applies to imports to SE3 from NO1 for export capacity to DK1.

Illustration of proposal for sum allocation. When importing to SE3 on one of the connections SE3-DK1 or SE3-NO1, the export possibilities on the other increase. Please note that the proposed sum allocation does not affect permitted flows / capacities in an easterly direction. 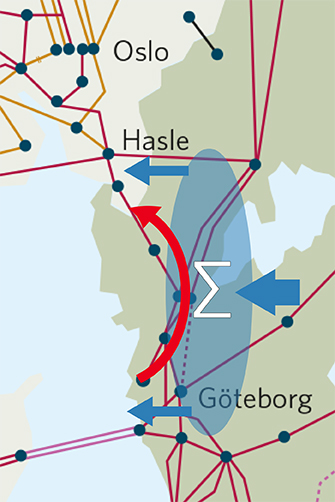 In order to implement the proposal for a new sum allocation, the change needs to be approved and prioritized by the system operators and power exchanges that are part of the common European market coupling for day ahead trade, SDAC. Svenska kraftnät has made a change request for a so-called LineSet, which is the corresponding term for sum allocation in the European market coupling algorithm Euphemia. The request is now being processed by SDAC. We expect to have more information about the implementation in early 2022 and will then return with more details.

Svenska kraftnät is interested in stakeholders’ views on the introduction. We will therefore include this in the agenda for the follow-up stakeholder meeting on the new situation with East-West energy flows planned for January 20, 2022. At the meeting, we will present more details about the possible introduction and provide an opportunity to ask questions.

Read about the event and register to participate

We will also carry out a simpler consultation. More information regarding this will be published soon.

Please direct any questions to Svenska kraftnät regarding the proposal for new sum allocation to kapacitetshantering@svk.se.